What sort of product is nitrated sultana raisin?Best producing centers of nitrated raisins in IranNitrated and Golden Raisin Price 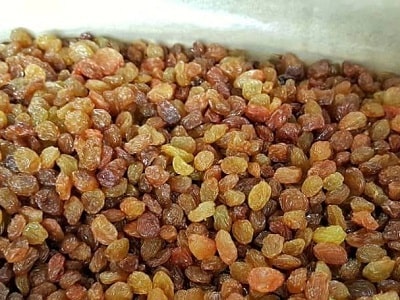 Number One Nitrated Golden Sultana Raisin sale known as one of the best products of Malayer and Takestan is started to be produced and sold. Our honored customers who intend to buy or export these products, can call our selling department in advanced.

What sort of product is nitrated sultana raisin?

As it is known, three methods are used to produce raisin from grapes:

Nitrated sultana raisin is called SULTANA as well. The term SULTANA RAISINS is normally written on the packs or boxes of this type of raisins.

This type of product is produced in almost all raisin producing centers.  Nitrated raisin is produced for two crucial reasons:

1- As this type of raisin is commonly an exported product, its price can easily rise as the currency in international exports and trades rises. So, it is considered as a profit for the producers.

2- This product can be kept for a longer time (at most two years) in storehouses.

We can point out three centers:

A great mount of nitrated raisins produced in Iran are usually made in these three centers.
Besides, there are other cities and towns make this type of raisins like Zanjan, Abhar, Bonab, Malekan, and Arak.
Nitrated raisin is found in two types too, a group with seed and the other without seed.
Seedless nitrated raisins are preferred for exports and Iran’s markets.

The price of this type of raisin got a great rise at the end of 2018.
The unreasonable increase in prices has made the international trades and exports really hard.

Nitrated and golden raisins are two different products, but sometimes these two terms come together too.
You can easily get the information about these two products on this page.
You can be aware of up- to- date prices as well.
Considering this, the price of golden and nitrated raisins is mentioned for five categories:

Golden raisins are, just like nitrated ones, exported products.

These packs are five-layer ones. To keep them safe, they are wrapped with a thick layer made of plastic that keeps the packs and boxes safe without being torn، It also guaranties their resistance againstthe moist and wet circumstance of sea transits.